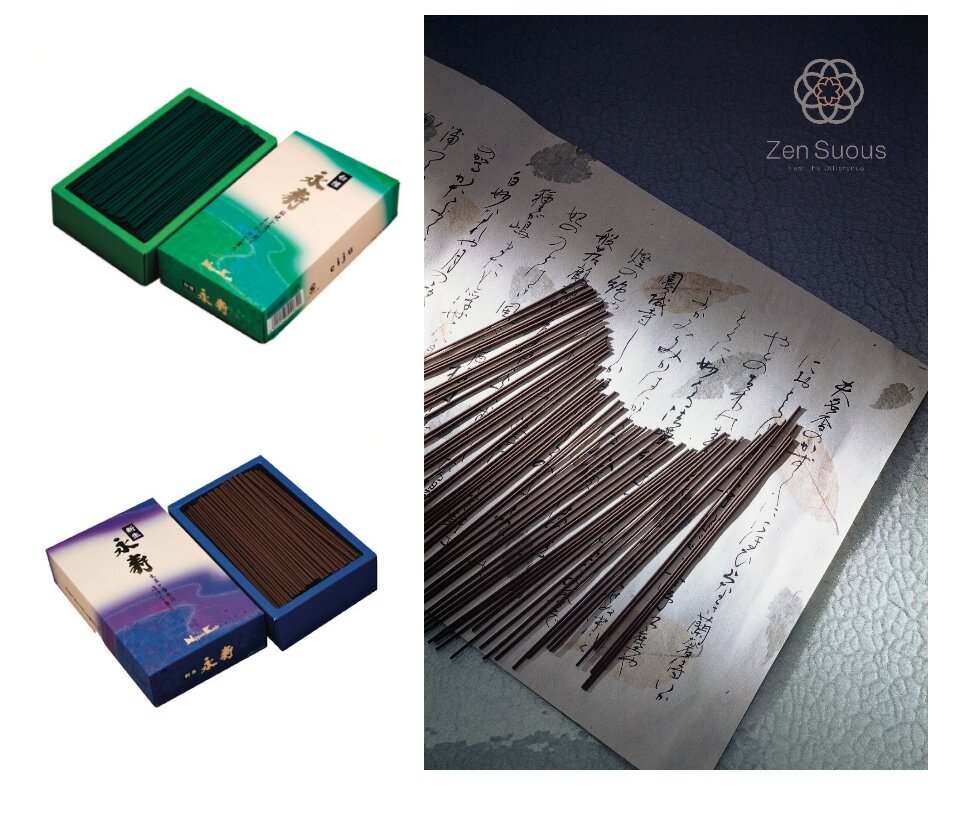 Nippon Kodo’s devotion to making fine incense follows a long and honored tradition that started more than 400 years ago and can be traced back to Juemon Takai, better known as Koju, a skilled artisan in the art and the principal provider of precious rare and exquisite aromas to the Emperor of Japan and his Court.

Many of those pleasing and enduring high-quality incense fragrances, which the company continues to produce to this day, are based on the original formulas created by Koju and later by Yujiro Kito, who was hailed as the genius of fragrance during the Meiji restoration period in the 19th century – around the time that Japan opened its doors to the world and began to modernize itself.

Brought to Japan in the eighth century by Buddhist monks, who used the mystical aromas in their religious ceremonies, “Koh,” as incense is called in Japanese, passed into the realm of the aristocracy centuries later as a source of amusement and enlightenment as they “listened to the fragrance” in their parlor games.

Nippon Kodo’s products have unique fragrances. These fragrances come from tying together closely guarded preparation skills that are more than 400 years old with the sensitivities of modern perfumers. We inherited our skills through writings on the mixture of aromatic woods by Takai Juemon, an incense preparer who supplied the Emperor of Japan in the Tensho era (late 16th century). Perfumers with Japan’s best noses and instincts interpret and evolve that tradition to create exquisite fragrances.

Nihon Shoki, a book of classical Japanese history, gives the first formal record of incense in Japan when a log of agarwood, a fragrant wood used in incense burning, drifted ashore on Awaji Island during the Asuka period in 595 CE, and was presented to Prince Shōtoku and the Empress Suiko. Shōtoku knew of incense burning from Buddhism, which had been introduced into Japan around 538 CE; incense was part of Buddhist ritual, and was imported into Japan from China through Korea. Agarwood was imported in 538 CE during the building of a temple.

A ritual known as sonaekō became established. Koboku fragrant wood combined with herbs and other aromatic substances was burned to provide a fragrant incense for religious purposes. The custom of burning incense was further developed and blossomed amongst the court nobility with the pastime of takimono, a powdered mixture of aromatic substances.

Fragrant scents played a vital role at court life during the Heian period, robes and even fans were perfumed and poems written about them, it also featured prominently in the epic The Tale of Genji in the 11th century.

感格鬼神 : Sharpens the senses
清浄心身 : Purifies the body and the spirit
能払汚穢 : Eliminates pollutants
能覚睡眠 : Awakens the spirit
静中成友 : Heals loneliness
塵裏愉閑 : Calms in turbulent times
多而不厭 : Is not unpleasant, even in abundance
募而知足 : Even in small amounts is sufficient
久蔵不朽 : Does not break down after a very long time
常用無障 : A common use is not harmful

Nippon Kodo Eiju Sandalwood Shinsei Eiju https://zensuous.my/wp-content/uploads/2021/03/7e43ce8f1c0d955e9079a4456fb9c9f8-2.jpeg
Incense can be used for many healing purposes. Incense can also be used for cleansing and will allow a person to relax. Sandalwood is a natural scent and it can help with cleansing of the mind and things that are clouding it. There are many benefits of sandalwood incense for cleansing properties.

There are no reviews yet.